DC Stokes Their Vast and Terrible Engine of Hate

I've had this theory for a while now. It sounds kind of crazy, I know, but it's really kind of the only explanation for certain business moves that DC (and its parent company Warner Brothers) makes. My theory is that they have some sort of mystical engine hidden away in the basement of the DC offices, a vast and terrible engine performing some sort of arcane function that is absolutely vital to the company. And this engine is fueled entirely by Alan Moore's fury. So every once in a while, DC has to just go out and do something for the sole purpose of infuriating Alan Moore.

That's really the only explanation I can come up with for this. There's certainly no creative reason for it; nothing Johns is saying makes a lick of sense as a plausible piece of story logic. This quote: “If you’re going to have a conflict between optimism and pessimism, you need to have someone who represents a cynical view of life and also has the ability to affect this," said Johns. "I know it’s crazy but he felt like the right character to use," highlights the fact that Johns apparently either didn't read or didn't understand a comic that was all about Doctor Manhattan rediscovering the tiny miracles that are all around us and setting out to do something wondrous and transcendent instead of being imprisoned by cynicism and despair. (Well, insofar as 'Watchmen' was "all about" any particular thing, because it really did have a multiplicity of ideas, but certainly that's what Doctor Manhattan's arc was about.)

And it's not a sensible business decision, either. Setting aside the plan to once again urinate on the smoldering ashes of your relationship with the man who penned all the best sellers in your back catalog, it's not as if the world is really clamoring for more 'Watchmen' written by people who aren't Alan Moore. If 'Before Watchmen' settled one thing, it was that. Nobody is interested in 'Watchmen' for the characters, they are interested in 'Watchmen' for the writing, which is the one thing that DC has, largely through their own actions, placed entirely and permanently beyond their reach.

(Perhaps that's actually part of the problem--DC, like Marvel, is predicated upon the notion that creators are valuable but ultimately interchangeable, and that the true value is in finding intellectual properties that they can continue to sell no matter who is behind the metaphorical camera. Having a series like 'Watchmen' that they cannot exploit in any meaningful sense without respecting Alan Moore's talent and autonomy is like a poison pill for them.)

Honestly, given Johns' tone in the interview, the decision seems to be entirely motivated by petty spite. It's as if Johns is saying, "Hey, comics aren't fun at all, they're joyless and despondent and filled with unlikable anti-heroes! Who could possibly be responsible for that? Well, I told everyone back in 2005 that it was all Marv Wolfman's fault, and yet somehow things still haven't gotten any better in the ensuing eleven years? I know! I'll write a comic that blames Alan Moore!" And meanwhile, the guy who's been working at DC for the last sixteen years and who's been their Chief Creative Officer for the last six somehow skates. (Who could that gentleman be? I wonder...)

Honestly, I really hope that engine is doing something useful. Because I've pretty much given up on any hope of getting good comics out of the whole deal.
Posted by John Seavey at 2:39 PM 25 comments:

As has been mentioned in the past, I've been recapping seasons of the Amazing Race over at Mightygodking.com. Now that the newest season is in the books, here's a linkroll of the episodes in order:

"I Should've Been a Boy Scout"
"You Look Like Gollum"
"Bros Being Jocks"
"Get It Trending"
"We're Only Doing Freaky Stuff Today"
"Let the Good Times Roll"
"Welcome to Bloody Fingers 101"
"I Have a Wedgie and a Half"
"Salt That Sand!"
"Monkey Dance!"
"That's Money, Honey!"
"The Only First That Matters"

Not sure when we'll see TAR 29--it's been renewed, but not yet scheduled--but I plan to blog that one as well!
Posted by John Seavey at 11:11 AM No comments:

Normally, it would take a lot for an issue of "What If?" to make a list of insane comics moments. I mean, it's a series that basically takes as its starting point the idea of checking out all the crazy consequences that might happen if Wolverine had become a vampire, or the High Evolutionary had turned everyone on the planet into a giant telepathic hive-mind. There's a certain baseline expectation in these stories of bizarre events that can't happen in a canonical Marvel title, is what I'm getting at. So I wouldn't generally say these count as "insane"...

But then I saw this. 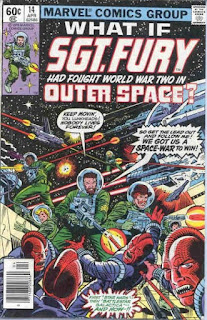 Take a good, long look at that, if you will. Imagine being a fly on the wall during that pitch session, hearing either an editor or a writer enthusiastically proclaim that you can get twenty-two non-crazy pages out of the concept of "Nick Fury and His Howling Commandos Fight Space World War II". Imagine being the person who has to actually sit down and write this thing. Imagine being the person who has to illustrate this collage of insanity, setting it out for posterity in pictorial form. You can't either? I don't blame you.

The basic premise, as outlined by the Watcher, is that Leonardo da Vinci was taken more seriously in this reality, and so humanity got a five-hundred year (or so) head start on air travel. Which turned into space travel, which turned into intergalactic travel, which means that by 1945, we've colonized big chunks of space and are running into the Betans, who look (and are explicitly described as in the narration boxes) "even more nightmarish than the worst caricatures of the Japanese." So, you know, we're not dealing with any kind of awkward and cringeworthy racism on top of this ludicrous premise.

The Betans attack one of our early warning stations (which, in this book's closest stab at subtlety, is not actually named "Space Pearl Harbor") and before you know it, we're at war! Nick Fury leads a group of Space Howling Commandos, who are pretty much the same as the normal Howling Commandos except that Gabe Jones has a "sonic laser bugle" and I'm so sorry if that phrase just made your head implode, and they train under the watchful eye of their computer base commander and his robot adjutant. Because of course they do.

As it turns out, the computer has a plan to lure the enemy into an assault on Midway Station (hey, remember what I said about subtlety? GONE NOW!) But the Betans have a secret ally among the humans who is feeding them information! Who is this traitor? Why, none other than Baron Wolfgang von Strucker, of course! But he's not allied with the Betans solely because this is Space World War II and he was a bad guy in the comics. No, he plans to draw the Betans and the Earth...ers? ...icans? ...erosities? ...anyway, he plans to draw them into a war while Germany hoards its resources in secret, the better to overwhelm both groups after the war and institute the rule of the Nazi Party! Which is still a thing in a world where space travel was invented by the time of the Wright Brothers.

Needless to say, Nick and his boys take care of the Betans, dish out a little chin music to the Ratzis, and even manage to save the robot adjutant from being scrapped in the assault on Midway. All in a space day's work! There's a suggestion that more lies ahead for Space Nick Fury and His Space Howling Space Commandos in Space, but thankfully this particular alternate timeline has never been revisited.
Posted by John Seavey at 1:48 PM No comments:

One of the interesting things about tabletop gaming is the way that it transforms the material that informs it. That is to say, the clear inspiration for fantasy RPGs (lawsuits and denials aside) is 'Lord of the Rings' and its successors. It is intended to create epic fantasies in which noble and stalwart heroes from a curated variety of races quest for the means to defeat a major, world-shattering tyrant in glorious, dramatic fashion...

But in practical terms, this "epic" is being interpreted by regular human beings with puckish imaginations and wild improvisational skills, resulting in battles where the villain is defeated by a horde of zombie chickens or the cave troll is repelled by the newly-researched spell "Bigby's Fist of Forcible Intrusion". Half the fun of gaming is warping and perverting (in the non-sexual sense of the word...usually...) the tropes of high fantasy into something more like what actual people would do in a fantasy world.

All of which is by way of saying that 'Rat Queens', the comic by Kurtis J. Wiebe, manages to capture the spirit of fantasy as it's practiced on the tables of the world far better than just about any of the fantasy novels that inspire said campaigns. The heroes aren't noble, wise, honorable warriors--they're debauched, selfish, vengeful, and mostly in it for the cash and the glory. They bicker, they plot petty revenge, they pack field rations that are entirely hallucinogenic drugs and candy, and they treat magical healing as a convenience rather than a gift from any god. (One of the best running jokes in the series is that the cleric is an atheist.)

All of this makes it sound like the protagonists of 'Rat Queens' would be unpleasant to spend any length of time with, but Wiebe is smart enough to realize that style and charm make up for morality any day. So Betty, the halfling thief, is loopily adorable, and Hannah the necromancer is smart and sexy, and Dee the cleric presents an interesting and thoughtful analysis of what atheism means in a world where the gods are real and present gifts of power to their worshipers. And Violet, as a dwarf who shaved her beard to present the face that she saw in her mind every time she looked in the mirror, is a welcome and meaningful representation of a group traditionally marginalized in fantasy stories.

Basically, 'Rat Queens' is a gloriously absurd, amoral, glamorous look at fantasy on the sharp end. It's about real people doing not so much the right thing as the thing that seems right at the time, and it's a whole lot of fun. I'll be picking up Volume Two as soon as I can.
Posted by John Seavey at 9:58 AM 3 comments:

Why I'm Rooting For Marvel To Regain the FF Rights

Because I totally want to see Victor von Doom make a guest appearance on 'Agents of SHIELD'. It would be so awesome to see the fight between him and Daisy Johnson.

Think about it--she'd blast him with seismic energy, shouting, "You're nothing but a relic--an outdated footnote to history made of obsolete technology and outmoded ideas. Oh, you've made your attempts to update yourself, but nobody cares anymore. The world's moved on without you."

And Doom blasts back with energy bolts, declaiming, "Relic? I am an icon! I am a legend, the cornerstone of the world you made. You think you would be anything without me? You think you're anything now? You're nothing but flash without substance, a few marginal improvements on a design I conceived. I am no footnote to history. I AM history."

And in the surprise finish, the Vision shows up, phases through both their chests to knock them unconscious, and says, "You're both obsolete. Unreal FTW!"

(Yes, this is a terrible joke.)
Posted by John Seavey at 9:53 AM No comments: