Frankly, making fun of the Blackhawks is like shooting fish in a barrel. Sure, they were more popular than Superman at one point and sold more copies of their comic, but you can say the same thing about Youngblood. They're basically just "wacky ethnic people flying jets", which was enough to hang your hook on back in the Golden Age when they didn't know any better (other successful comics back in the day were "a guy who hits people", "a guy who throws smoke bombs, then hits people", and "a short guy who hits people".) But once the Silver Age rolled around and kids got real superheroes, sales of the 'Blackhawk' comic plummeted.

Which is when things got...awkward.

Because it led to Blackhawks #228, which is nigh-unto-legendary in the annals of lovers of Silver Age goofiness everywhere. The DC Universe goes temporarily meta, as Batman himself informs the President of the United States that the Blackhawks have become so terminally lame that even other fictional characters can't stand them anymore. (Lest you think I'm joking here, the actual quote from the comic is, ""It's fact, sir -- the Blackhawks are washed-up has-beens, out of date antiques, a danger to national security! To put it bluntly... they just don't swing!" That's Batman, explaining to the President. No really.)

Later, the secret agency known as GEORGE (I'd really like to say that's not an acronym, just because I love the idea of a secret agency named George, but it actually stands for "Group for Extermination of Organizations of Revenge, Greed, and Evil") defeats the Blackhawks in a mock battle to show them how inept they are. It's a comic-book intervention, basically. The Blackhawks decide that the only way that they can become crimefighters as good as superheroes...is to become superheroes themselves.

And this is what they come up with. 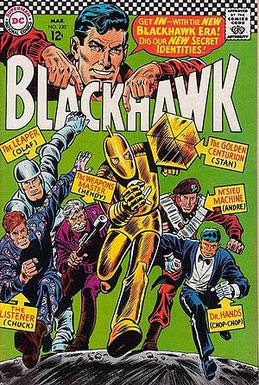 ...just feast your eyes on that for a moment. Marvel at Stan's...what the hell is that, a tesseract on his wrist? Does he trap enemies in the fourth dimension with it?

Gaze in astonishment at "The Listener", which has to be the least menacing superhero name ever. "Talk, punk. Tell us what your plans are. Because I really want to know what you're thinking. People say...I'm a really good listener."

Admire the Weapons Master, who looks something like my mental image of the Unabomber before they caught the Unabomber.

And Dr. Hands...you know what? That's actually a step up in dignity for Chop-Chop. Screw it.

After 14 issues, this take on the characters was pretty much dumped down the memory hole to land next to Mopee, the Heavenly Helpmate who gave the Flash his powers, and the Blackhawks themselves entered decades of on-and-off (mostly on) comics obscurity. Their revamp, though, entered comics history as the only desperation move lamer than Penance.
Posted by John Seavey at 7:40 PM

So, what, no comment on the fact that his costume is covered in EARS?

If pajamas emblazoned in ears don't communicate that you're good at listening, I don't know what will.

In fairness, the Listener was primarily high-tech surveillance, not a frontline guy. Still a lame name.

I rather liked the initial 1970s relaunch issues by Steve Skeates. It struck me he put a lot of thought into setting up a new status quo--US contacts, day jobs, rivals and so on. It went down in quality when he left, though.

Weirdly, when I reread them a couple of years back, I realized the announcement in the last issue that Blackhawk was disbanding the team (due to one dead, two physically invalided), which I'd laughed at at the time, was arguably true. It was the last modern-day Blackhawk story, so I'm inclined to take them at their word.