Fame Is a Fickle Beast

The Onion AV Club has an interview with Barry Bostwick up today, part of their "Random Roles" series where they ask famous and well-respected actors about some of the more interesting parts in their long, distinguished careers. This is kind of weird for me, because my primary memory of Barry Bostwick is as the hero of the 1982 movie 'Megaforce'.

In fairness, I thought for years that it was Chuck Norris in 'Megaforce'. This is because my primary memory of 'Megaforce' is not the movie itself, but the ad for it that ran in dozens of comics when I was a kid: 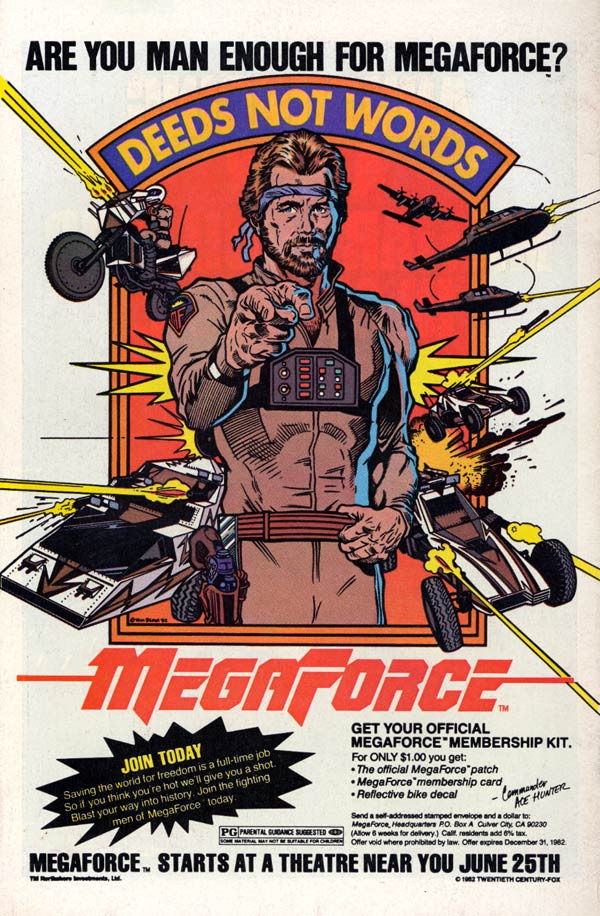 There aren't any actors mentioned--it's just an ad for membership in a fan club for a movie that hadn't even come out yet, because it was the 80s and you could get away with stuff like that. The guy with the headband looked like Chuck Norris, so I assumed for years that it was a Chuck Norris movie and that it was some sort of cool live-action G.I. Joe pastiche full of awesomesplosions.

Then years later I saw it, and I realized that they must not have been able to get Chuck Norris and so they got Barry Bostwick instead and had him grow out a Chuck-style mullet and beard. Knowing what I know now about Bostwick's other parts, this has to be one of the most hilarious casting decisions in the history of cinema, but it's such a memorably goofy and terrible movie that it is my indelible association with the actor.

What I'd really like to know is if anyone else does this. Do any of my readers see Orson Welles and think, "Oh, right, Transformers!"? Or immediately jump to the conclusion that we're talking about 'Overdrawn at the Memory Bank' when we discuss Raoul Julia? Feel free to discuss your awkward actor associations in the comments!
Posted by John Seavey at 8:57 AM

I don't think of "Transformers: The Movie" immediately when I think of Orson Welles, but it is is the second thing after his wine commercials (and I love and respect Orson Welles).

I always think of "Streetfighter" first when I think about Julia.